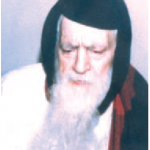 On Wednesday Elul 5, 5746, after a long and painful illness that lasted three years, the Tzaddik Rabbi Moshe Aaron Pinto, the “Light and Pillar of the World,” passed away in Ashdod at the age of 73. Rabbi Moshe Aaron Pinto was the son of the saintly and venerated Rabbi Haim Pinto Hakatan, and the descendant of the great Tzaddik Rabbi Yoshiyahu Pinto, author of the book The Rif on Ein Yaakov, and of Rabbi Yaakov Pinto, author of the book on the Zohar entitled Mikdash Melech. Rabbi Moshe Pinto was among the Tzaddikim Nistarim (Hidden Righteous).

He did not wish to be known, and forbade people from talking about him. Yet on the day of his passing, people testified to the miracles performed because of the Tzaddik’s blessings. His students gathered his writings together to make a book. His miracles are innumerable. And yet, even after the passing of Rabbi Moshe Pinto, people were still able to benefit from him, for as our Sages say, “The Tzaddikim, even when dead, are alive.”

A neighbor of Rabbi Moshe Pinto was medically declared infertile since the age of 12. Two and a half months before the passing of the Tzaddik, she came to see the Rebbetzin in order to beg her to allow her into Rabbi Moshe’s room without speaking or bothering him. In entering, Rabbi Moshe Pinto, despite his illness and pain, gave a friendly signal towards this woman and smiled to her. Fifteen days later, she was pregnant. The doctors couldn’t understand anything. Rabbi Moshe Pinto suffered from many illnesses, most notably from gangrene. Doctors at the famous Hadassah Hospital in Jerusalem wanted to amputate both his legs. He always refused, however, saying that no descendant of Rabbi Yoshiyahu Pinto had ever suffered from mutilation.

He always reminded the doctors, “I came into this world with two legs, and with two legs I will leave this world.” In saying this, he would raise his hands towards the sky and invoked his great grandfather, Rabbi Haim Pinto Hagadol. The day in which he was finally to be operated, the doctor told the Tzaddik’s entire family that he would try one final treatment. If that failed, he would be forced to amputate his legs or else Rabbi Moshe’s life would be in danger. The miracle occurred. That same day there was a marked improvement in his blood circulation, and the operation was no longer necessary. Once free of the gangrene, Rabbi Moshe said, “It is now that my sufferings will begin!”

From that point on, his state became increasingly worse. He lost his ability to speak, to hear, and to see, and he was subject to heart attacks. Each time, he raised his hands towards the sky and kissed them as a sign of joyous submission. The Admorim and Rabbanim that came to pay him visits during this time noticed two things: Each time that he touched his head, it was to ensure that his kippah was in place, and every time that he made a gesture, it was to have people wash his hands. And yet medically, his brain had ceased to function. Despite everything, he bathed in the light of Kedusha and his spirit was always with his people, for whom he never stopped praying.

When his children would bring him his Tallit and Tefillin, he took them with his right hand, held them firmly to his heart, and began to gently cry. He cried because he was no longer able to perform the holy mitzvah of Tallit and Tefillin. Other tears flowed for several moments just before his passing. These were not tears of physical suffering, but rather tears from the ultimate spiritual suffering of not having witnessed the advent of the Messiah during his lifetime. From the depths of man’s despair, the hope exists that our much beloved Rabbi Moshe Aaron Pinto, with his legions of Israel’s holy ones, will intercede on our behalf and precipitate the arrival of the Messiah. Amen and Amen.

In 1984, before his illness, he gave his children two suggestions: