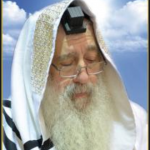 I thank G-d for having rescued me as I left yeshiva, when the evil inclination was inciting me to enjoy the pleasures of this world. Seeing that I was a young, single student, as well as the descendant of a pure and holy family, the evil inclination wanted to divert me from the right path. In fact it almost succeeded in entrapping me, and I felt that I was almost giving into it. If not for G-d’s help and the merit of my fathers, who knows where I would be today? G-d’s kindness got the upper hand, and the merit of my fathers came to my rescue. I therefore left the place where I was living at the time and put myself into exile. I wandered from city  to city, traveling to Morocco several times in order to pray by the graves of my ancestors. At that time I began collecting stories that people would tell me about the tzaddikim, recording them in a journal. This reconnected me to the blood of my ancestors – the very blood that flowed in my veins – and from then on people began visiting me for advice and blessings.

They did this even though I knew nothing. I was an empty well, devoid of all knowledge, since I had forgotten almost everything I had learned. However I suddenly received help from Heaven, and I began succeeding in all my endeavors. In fact everything I had learned was coming back to me, and I began to develop a love for Torah. Still, the evil inclination was not finished with its plans, lest it lose me for good! This miserable wretch caused me great suffering, bringing hardships upon me day after day. How many times did I decide to stop following the footsteps of my ancestors and plan, as so many others did, to begin working or start a business! However I always lost money, and everything I did to earn a living ended up in failure. I began to pray more and more for the Creator to open my eyes, until finally His kindness prevailed. This happened about 15 years ago, after a certain event. 9 A Jewish man from Paris, who was married to a non-Jew, came to ask me for a blessing. My response, which surprised even myself, was to yell at him as if I was an army officer.

In fact I ordered him to divorce his wife! When he left, I felt like another man. I understood that Heaven had appointed me for this task, meaning that I had to help people do teshuvah, just as I myself had done teshuvah. In fact everyone, virtuous or not, must constantly do teshuvah for as long as they live. At the time I felt obligated to take the same path that my ancestors had taken, for immediately after this incident people began coming to me from every corner of the globe for advice and blessings.

In fact the money I was receiving amounted to a small fortune, yet what was I to do with it all? As most people know, the Pinto family had never, up to that point, established a yeshiva or Beit Midrash. I therefore decided to set up institutions to further the study of Torah, and with G-d’s help I will establish as many Torah institutions as there are tzaddikim in the Pinto family, namely 26. Whenever a person becomes famous, he finds himself confronted by those who seek to oppose him. People become his enemies and say, “Only yesterday he was one of us, so how did he suddenly become a leader? Why is he lauded and admired by thousands for his wonders and miracles? Perhaps he’s using the power of the occult!” Others say, “He’s obviously making all this stuff up and fooling people!” When I heard such slanderous things being said about me, I became dejected and didn’t know if I should stop or continue.

However one thing I did know was that my success was due to the merit of my fathers! I had placed my trust in the kindness of Hashem, and I began to give public lectures to thousands of people. The goal of these talks was to bring people back to their source, back to the Torah. I covered my ears at the same time, ignoring the gossip swirling about me and accepting my suffering with love. I remember that 13 years ago, in the French city of Lyon, I asked my father (may his merit protect us) what I should do. Should I continue what I was doing or should I stop? My father became angry and said, “Did you take leave of your senses? Are you better than Moses and Aaron? Are you better than the Baal Shem Tov or all the other tzaddikim, those far more righteous than yourself, who did not react to the insults hurled at them?” When I told my father that I wasn’t at their level of holiness, he replied, “Every Jew has the ability to reach the level of our teacher Moses. One step in this direction is enough to overcome your weakness. Connect yourself to the tzaddikim, read the books that discuss their lives and deeds, and in this way you can learn a great deal from their conduct.”

That was precisely what I did. I have received many letters from great Torah figures of our generation, letters in which I am addressed as a tzaddik, saint, or venerable individual. This makes me feel extremely uncomfortable, since I am not a tzaddik, a saint, or venerable. I have a feeling that I am deceiving those who see me in this way. I asked one rabbi for help by showing me how to overcome my weakness when receiving such letters. He simply told me, “The letters that you receive from these great men, letters in which they 10 ascribe great qualities to you – ones that you don’t feel you have – they must compel you to obtain those very same qualities! You must strengthen your service of Hashem, for it is possible that you can reach this level one day, and perhaps even surpass it!” I answered, “That’s an impossible goal. I’m an adult and I have responsibilities. I don’t have the time to become pure and holy like my ancestors.” He very simply repeated, “Do what you have to do and what is expected of you. Then have faith in Hashem and His will. The main thing is that you surrender to Hashem’s will.”

I am revealing my intentions here to everyone reading this, asking that they not judge me for my deficiencies, failings, and limited Torah understanding, for I am not making any claims of being among the great. I have not asked for anyone to think of me in the way that some people do, and I have not sought the position that I find myself in, one that only attracts jealously, suffering, deprivation, exile, and dangerous travels. I find this all the more difficult because I always have to fight my evil inclination and overcome the pride that is aroused by the honors I receive. I have no desire for official positions, honor, wealth, or donations. All I ever wanted was to be a simple Jew who earned an honest living in business. I fully realize that I do not deserve the honors I receive, and I often remind myself of who I really am. I have no doubt that all these honors really belong to the merit of my ancestors, who were holy to the greatest degree. Those who come to see me, deep inside they know that I am but a descendant of a line of tzaddikim.

They know that I work by the means and strength that Heaven has given me on account of the merit of my holy fathers. I would like to conclude with a prayerful supplication: If bnei Torah are not pleased by what I have written, or by what I have said to crowds of followers, may they judge me fairly because I did not impose my teachings on anyone. In fact it is even possible that some people have found my words useful. May G-d fill my heart with true love. May He give me the strength to serve Him with reverence, love, and self-effacement. Above all, may He bring about the Final Redemption, speedily and in our days. Amen.