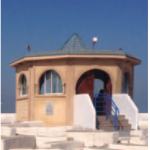 He was the son of the saintly and venerated Rabbi Shlomo Pinto Zatzal, the descendant of Rabbi Yoshiyahu Pinto, known by the name of the Rif of Ein Yaakov.

Rabbi Shlomo Pinto Zatzal instructed Torah to his son, Rabbi Haim Pinto, when he was very young. Unfortunately, Rabbi Shlomo Pinto passed away in 1761, leaving behind him an orphan barely 12 years old. That same year, an earthquake completely destroyed Agadir, and numerous Jews fled and settled in Mogador (Essaouira). Rabbi Haim Pinto was to be found among the refugees.

Rabbi Haim Pinto studied Torah along with Rabbi David Ben Hazan at the yeshiva of Rabbi Yaakov Bibas, the Dayan of the city. Rabbi Haim Pinto’s reputation was so great that all Morocco resonated with accounts of his miracles and wonders, and this from his most early years.

His teacher, Rabbi Yaakov Bibas, died in 1769, and the community of the city turned to Rabbi Haim Pinto to accept the heavy responsibility of Dayan. Being but 20 years old, he finally accepted this responsibility in association with his friend, Rabbi David Ben Hazan. Rabbi Haim Pinto carried out his mandate as Head of the Rabbinic Court in an extremely firm manner, and when necessary he knew how to be very strict. Never did he allow someone to act incorrectly, exercising this function for more than 70 years. The greatest Chachamim of the generation esteemed him with fear and respect, and Jews and Muslims alike venerated him. His fame spread throughout Morocco, across the Middle East, and reached all the way to Europe. Eliyahu Hanavi revealed himself regularly to Rabbi Haim Pinto and studied with him, which explains why Rabbi Haim Pinto participated in all the Brit Milahs that took place in Mogador.

Among the many stories about Rabbi Haim Pinto z’’l, the following account has been gathered from the book on him entitled The Light of the Righteous.

Rabbi Haim Pinto awoke every night to recite prayers and to make “requests of G-d”. Afterwards, he would study Torah until dawn. One day his daughter Mazal entered into his room in the middle of the night and saw him studying with a man. In the morning, he scolded her and said, “Why did you come into my room without knocking?”  She was not in a position to see Eliyahu Hanavi. “Now you deserve a punishment, meaning that on the day of your marriage you will become blind.” His daughter, who was a great saint, accepted the decree.

Later, Rabbi Haim Pinto had a dream in which he saw Rabbi Khalifa Malka, who told him, “I sent you my grandson happy, and you sent him back to me sad.” Rabbi Haim Pinto responded, “Your honor knows that my daughter Mazal saw Eliyahu Hanavi and a decree has been given: On the day of her marriage, she will become blind. This is why I refused her to your grandson.” Rabbi Khalifa replied that his grandson would accept this decree as is. All of this occurred during the dream.

The next day, Rabbi Haim Pinto sent a special messenger to Agadir to bring the grandson of Rabbi Khalifa Malka to him. When Rabbi Haim Pinto saw him, he explained what would happen to his daughter on the day of her wedding, and he agreed. However, thanks to their merit and uprightness, this cruel decree was annulled and they had children and lived a great many years.They passed away in the same week.